A volunteer from Parks and Recreation gathers trash from the banks of the Schuylkill River at Bartram's Garden.

You never know what you’ll find when picking up trash along Philly’s rivers.

Yes, you read that right: an actual check for over thirty grand was one of the many pieces of litter gathered by more than 100 volunteers assembled at Bartram’s Garden for a big cleanup on March 1, 2016. (Needless to say, the check, for a local school and already cashed,  won the award for “weirdest find” of the day.)

Sponsored by the Philadelphia-based and “ocean-friendly” clothing company United By Blue, the volunteer effort was the first of a number that will be held along area rivers this spring.

During yesterday’s event, staff from Philadelphia Water, Parks and Recreation, the Schuylkill Action Network, United By Blue and the green infrastructure design and maintenance firm AKRF gathered 3,372 pounds of trash from the river banks in less than two hours.

Philadelphia Water's Waterways Restoration Team returned to do some heavy lifting at an area of Bartram's Garden often impacted by illegal dumping and removed trash discovered during the cleanup that was too heavy or big for volunteers to grab alone. Here's the updated—and much expanded—trash haul total:

The event was also the first official “Schuylkill Scrub” of the year. Schuylkill Action will continue to host their signature litter removal gatherings throughout the Schuylkill River Valley from March 1 to May 31. Learn about participating in the next Scrub here.

Philadelphia Water and United By Blue will also be partnering to host a number of watershed-focused cleanup events this year, including two on the Delaware River in April and May. Sign up here to help get trash out of our waterways. 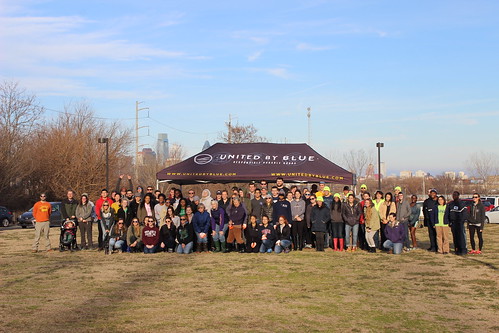 With the fall Love Your Park day of service upon us, we’ve been thinking about how much we love our parks and what the folks over at Philadelphia Parks & Recreation do every...