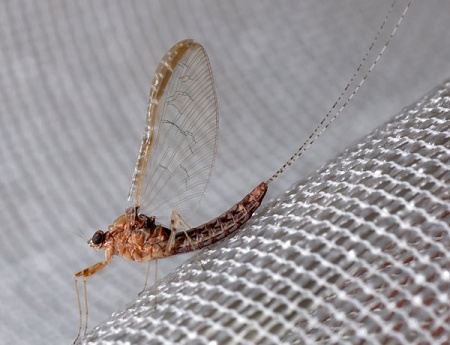 When the Philadelphia Water Department's aquatic biologists investigate Philadelphia's streams and rivers to take stock of the number and variety of species inhabiting our waterways (they call this process a bioassessment), they pay special attention to mayflies. The presence of pollution-sensitive mayflies can indicate the level of biological health in a stream, and a mayfly census of sorts is just one of many tools used to monitor the quality of local stream ecosystems.

About 364 days of the year, you're not likely to encounter the version of the mayfly pictured above (which is of the order Ephemeroptera and the family Baetidae). The adult, winged mayfly lives only long enough to reproduce, surviving anywhere from 30 minutes to a day, during which time its digestive system is filled with air. More often you'll see mayflies in the nymph, or naiad, stage, during which they are wingless and mostly feed on algae. And despite its name, mayflies are common not only in May but also through June, July and August.