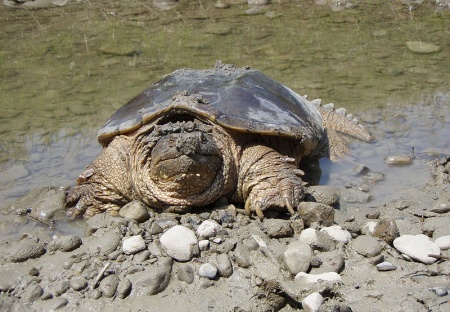 Who's afraid of a little (or, in some cases, actually quite large) snapping turtle? Not Philadelphians, who made dinner out of Cheldyra serpentina for decades in the form of snapper soup, a staple at city restaurants such as the Oyster House and the late Bookbinder's. The truth about snapping turtles is probably somewhere in between; these freshwater turtles can be ill-tempered when out of the water, and their bite can cause severe injury. The snapping evolved as a defense mechanism, as Cheldyra serpentina does not have the ability to retreat into its shell. However, when in the water, snapping turtles are docile and will seldom attack humans.

This spring, PWD biologists spotted two snapping turtles in the lower reaches of Tookany Creek (which becomes Tacony Creek within Philadelphia city limits). These turtles—whose carapaces, or shells, can grow to 20 inches in length—prefer to inhabit muddy areas of slow-running streams, lakes or ponds, and they can survive up to 30 years in the wild.