This is the second installment in our blog series looking at all the great news and events 2016 brought for Philly’s water community.

In 2016, Philly residents got to meet their watershed spirit animal as we rolled out new storm drain markers featuring a special aquatic critter for each of the city’s seven watersheds.

“Some of the animals are more common than others, but they are all native to Philadelphia and they all depend on clean water to survive. Some species, like the American shad on the Delaware markers and river otters on the Schuylkill markers, are already making a comeback thanks to water quality improvements in Philly’s rivers. You can catch a few shad here in the spring during their migration, and if you’re lucky, you might see an otter at the same time

They are proof that watershed stewardship is working here, but there is still a long way to go. Some of the other species, like North America’s smallest (cutest?!) turtle, the bog turtle, and the prehistoric shortnose sturgeon could still use a helping hand.

It’s easy to forget when walking around your neighborhood, but keeping streets and storm drains clean can really be the difference that allows these creatures to recover.

What better way to remind residents than to show them who is on the other end of the drain?“

The collaboration with the City’s Dept. of Public Property and Mural Arts also featured new amenities for neighbors and a stunning mural from local artists Eurhi Jones and Michael Reali. 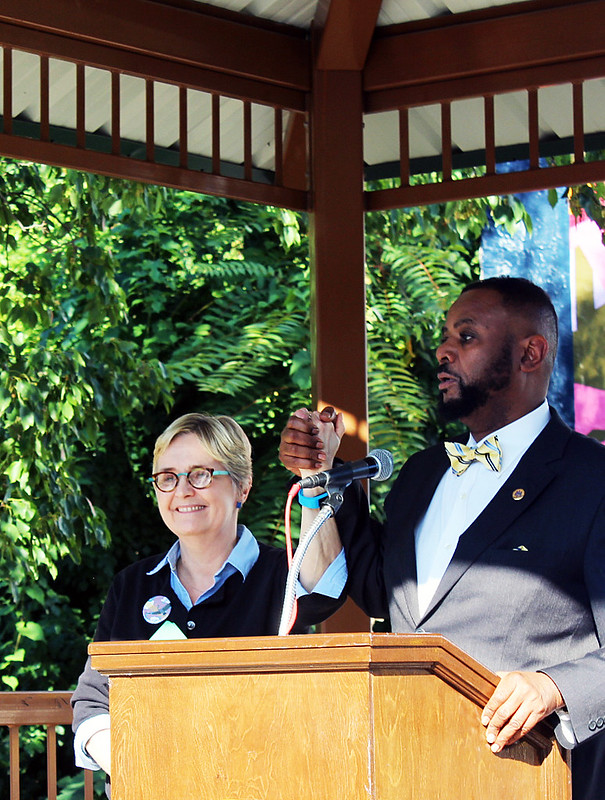 We also expanded our Homeowner Emergency Loan Program (HELP) to offer interest-free loans for those interested in replacing service lines (the pipe running from the water main in street to a home’s water meter) that made from lead. In a testament to the Schuylkill’s environmental rebirth, this annual trip—spanning the entire length of the river—saw its biggest turnout since the Sojourn’s launch in 1998.

Roughly 110 people were on the water each day, and a record 79 participants made the full 110-mile trip, which lasted from June 4 to June 10. On the final leg, 115 Sojourners made their way from West Conshohocken to Boathouse Row above Philadelphia’s Fairmount Dam.

When Maura Jarvis—at the time a Drexel co-op intern with the Public Affairs Unit—found out that the Water Woman getup not only still existed, but was sitting in a nearby closet, it didn’t take her long to suit up. 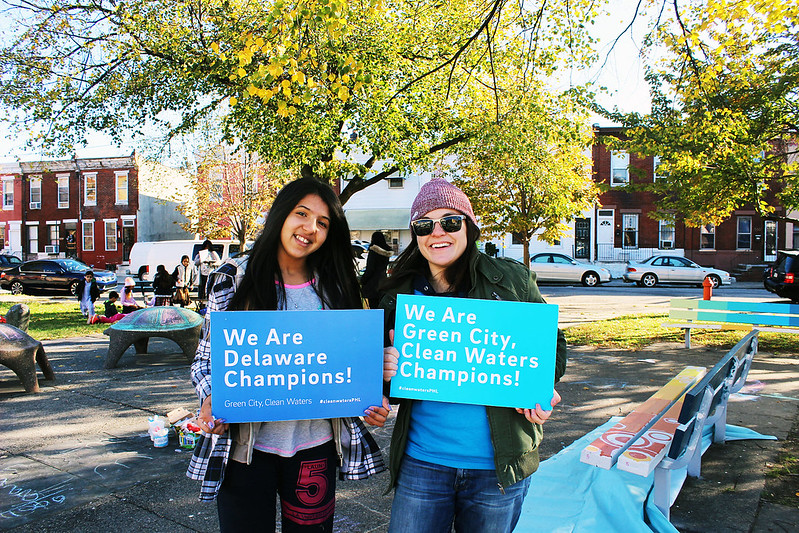 In July, AmeriCorps VISTA Amanda Krakovitz joined the PWD Public Engagement team as an “Outreach Ambassador”—a special role created with the help of the City’s Office of Civic Engagement and Volunteer Service and their SERVE Philadelphia program.

This unique partnership joins the public service values of the Volunteers in Service to America program with PWD’s robust efforts to engage residents and build stewardship for Philly’s waterways. From taking Philly students on a Schuylkill River canoe trip through the River Days watershed exploration series to hosting exhibits like “Falling Waters,” a photo exploration of the Schuylkill River’s historic navigation infrastructure, our partners at the Fairmount Water Works made 2016 a banner year for educating the region about our waterways.

When complete, the hatchery will act as an educational space where students and other visitors can observe these intriguing–and often threatened–aquatic creatures while learning about their role as unsung heroes of water quality.

In our third and final post recapping 2016, we’ll look at some impressive (and interesting) awards and honors given to PWD last year…

In the third and final part of our 2016 highlights series, we look at awards received by the Philadelphia Water Department and its employees as well some grants distributed la... Those walking the streets of Manayunk have probably noticed a little extra pop of color in the neighborhood, and not just from the spring foliage. Since the first week of May,... Over the past decade, a monumental force in the success of Green City, Clean Waters has been ongoing support from external entities. Whether City agencies or community organiz...