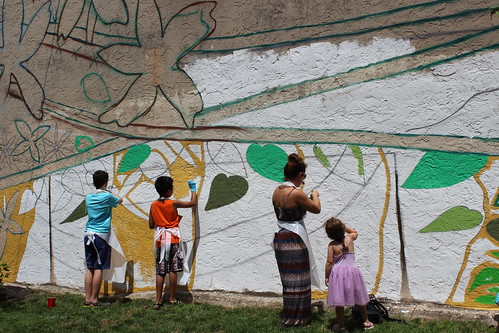 The site of Roxborough's Pocket Park project, nestled between two buildings along Ridge Avenue, now features the beginnings of a water- and history-themed mural—a bright new addition to a still-developing space that the community hopes will be a keystone attraction for residents and visitors.

Nearly 60 Roxborough neighbors and visitors, including U.S Congressman Dwight Evans, participated in a June 25 Roxborough Community Paint Day and worked side-by-side with Santoleri for a communal painting event that got the new work started.

The mural, one of several PWD has collaborated on to highlight infrastructure, is the latest step toward realizing the Pocket Park project, an effort by the community to transform an unused parking lot at the heart of the neighborhood's main shopping district into a lush green space where residents can gather for events and relaxation. The project is currently in the second of three phases.

Included in the renovations are landscaped rain gardens, plantings, flower beds and special rain-absorbing pavement that will help protect the nearby Schuylkill River from stormwater runoff. The water-themed mural was designed to complement those green stormwater tools. When complete, the park will include stadium-style bleacher seating, artistic benches and a boardwalk spanning one of the rain gardens.

The three-hour event, held with RDC, drew a big crowd from the start, with many members of the community arriving right at 11 a.m. Some of the younger participants dove right into the action, using their bare hands as the tool of choice. More conservative painters donned gloves, aprons and brushes before helping to paint the mural.

Between paint refills and excited chatter about progress on the new park, residents snacked on pretzels from local bakery Tasty Twisters and stayed cool with Philadelphia tap water. By the end of the event, vibrant yellows, blues, grays and greens decorated the previously dull wall overlooking the lot and helped to bring the new park area to life.

Ripe with a blend of local historic lore and natural elements, Santoleri's mural speaks to water's essential role in nourishing life while also illuminating one of the area's most intriguing early settlers, the German philosopher-monk Johannes Kelpius, sometimes referred to the Mystic of the Wissahickon.

Central to the Kelpius lore (and a big part Santoleri's mural) is the Cave of Kelpius, a somewhat infamous local spot along the Wissahickon Creek where the hermitic Kelpius and his followers gathered in anticipation the end of the world, which they believed would come in 1694.

Just like today's Roxborough youth, Santoleri grew up hearing rich stories about the mysterious monk and his practices along the stream, and those stories continue to inspire him today.
In addition to the Kelpius cave, the mural features a red fox—a nod to those who claim Roxborough got its name from Kelpius' writings describing the area as “where the fox burrows in the rocks.”

Water elements include waves and ripples swirling across the entire mural and a rolling ball of water flowing downwards, a tribute to Roxborough's hilly terrain.
Santoleri, whose Philadelphia projects include the mural-mosaic work gracing the nearby Fountain Street steps, said his main inspiration for the Pocket Park design came from the neighborhood's location between two watersheds: the Schuylkill and the Wissahickon.

The mural itself lies within the Schuylkill watershed, while the opposite side of Ridge Avenue drains into the Wissahickon watershed.

All of the flora and fauna featured in the mural are native to the two watersheds, including the red salamander, featured on PWD's Wissahickon storm drain markers.

Residents can stop by Pocket Park, located at 6170 Ridge Avenue, and see Santoleri's progress on the mural throughout the summer. Stay tuned for a celebration welcoming the finished work in a few months! 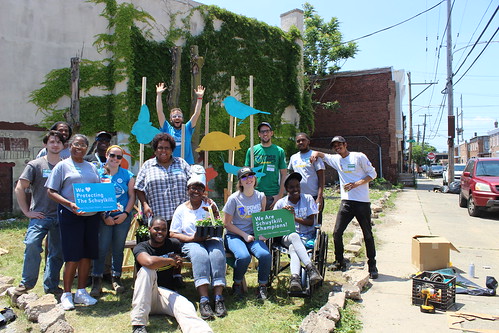